So one of Hillary’s wedding wish-list items is to have “soft seating” at the reception. In case you aren’t familiar with that term (which was probably invented by some jacked-up wedding planner who ran out of more practical ways to pad the budget), the idea is to drag couches and ottomans and other “soft” pieces of indoor furniture out to the lawn or the putting green or whatever, and then let your guests sit on them.

When I first heard the plan, I was in – particularly since a couple of soft seats have been languishing in our garage for the past year. I bought them for 25 bucks at a rummage sale, thinking that they had potential. Sure, one had a broken arm, the other had the stuffing coming out, and neither chair was anything I would put in my house, let alone in an elegant wedding display. But really, how hard could it be to fix ’em up?  I put on a visor, grabbed a few tools, and got going.

Two hours later, I did what I imagine any good Pinterest person would do.  I stopped for a cold drink and a selfie: 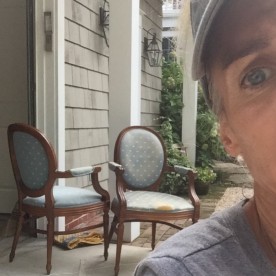 I know it doesn’t look like I’d made much progress. But for the record, when I snapped this pic I’d already used a drill, an electric sander, and a big saw – still in its original wrapper – that I’d found on our tool wall (i.e., the peg board that holds things like rakes, shovels and our disco lights). (I’m pretty sure the saw was a Father’s Day gift from early on in our marriage, back when I thought Robbie might one day want to build something.) I’d also gone thru about half a tube of wood glue and, in an effort to bring the whole project more into my strike zone, attacked the chair with some hedge clippers.

I’m no math brain, but even I could tell that at the rate I was going, there were not enough hours left on the calendar to finish the job. I needed reinforcements. I texted Charlie, the groom-to-be.

And an hour later, it was done.

Charlie works at a pretty swanky trim and millwork shop, where the guys get excited over things like a fresh slab of mahogany and build doors that would make Thomas Jefferson drool. I like to think that, given access to Charlie’s tools – which included a bigger drill, a couple of powerful clamps, and a compressor thing that went off at random intervals and sounded more like gang warfare than craftsmanship – I could have finished the job. But I know it’s not the tools that make the man (or woman). It’s the man that makes the tools. (Case in point: Charlie didn’t even have hedge clippers.)

And watching him work, I realized that it made perfect sense that Jesus would come to earth as a carpenter. Because basically, we’re all just a bunch of soft seats with the stuffing coming out, broken arms and legs pointing every which way. We all need fixing up. But when we try to do the job ourselves, drilling and hacking away, well. Hedge clippers doesn’t even begin to cover it.

It’s only when we realize our utter hopelessness and call in the Professional that things begin to change. God knows exactly where to drill so that the pieces of our lives will fit together, just how much pressure it will take to make us strong, and which rough edges to sand.

It’s incredibly freeing, knowing that we can relax and trust God to do for us what we cannot do for ourselves. And it’s incredibly humbling, knowing that he’s doing the job not just because he can, but because he wants to. Tim Keller wasn’t talking about furniture repair when he wrote his commentary on Galatians, but his words about our condition still fit: We are more wicked than we ever dared believe, but more loved and accepted in Christ than we ever dared hope.

To adapt Keller’s point for the soft-seating crowd: “We are uglier and more broken or unstable than we ever imagined, but in God’s hands we are exquisite workmanship, more lovely and valuable than we could ever dream. And he’s making us fit for a purpose.”

That’s the message of grace, in a nutshell.