Robbie and I had gotten an early start on our hike. We’d been climbing for more than an hour–without spotting even one other person–when we came upon a “Bear Alert” sign. 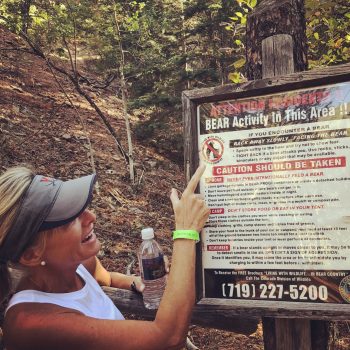 Don’t let it sense your fear.

That’s what you’re supposed to do (or not do?) if you meet up with a bear. That, and speak softly. To the bear.

That sounded about right to me. In fact, the “no fear” advice is the same thing I heard as a child, back when I was frightened of dogs. We didn’t grow up with pups (unless you count Duke, the black Lab we had until it ate my mom’s diamond watch), and I wasn’t sure how to behave around them. The fact that Mom had been wearing the watch when it disappeared loomed large in my mind, and when a strange dog came bounding up on the playground one day, I balked.

It worked; the dog left me alone. And that day, something clicked in my mind. Letting something scary–be it a stray dog, a health concern, a bully, whatever–know you’re afraid never helps. All it does is bolster the threat’s position, while weakening yours.

Or, as Robbie might put it, “It lets the camel get his nose under the tent.” 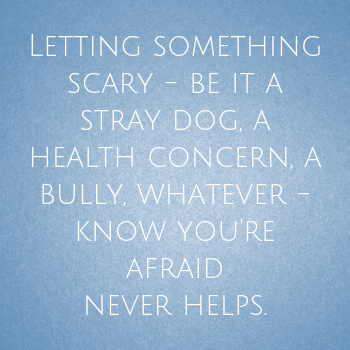 He was less enthused by the bear sign than I. I was standing there, blathering on about how if we DID see a bear, he should run, since he is faster than I am and our kids would want one parent to survive. I figured I could stick around–speaking softly–and at least buy him some time.

But my man wasn’t having it. Given the total lack of human activity and the fact that we were in a place we’d never ventured before (and probably also the fact that, being a gentleman, Robbie knew he wouldn’t just leave me chatting it up with a bear), he suggested we might want to turn back.

“Turn back?” I replied, incredulous. “We are almost at the summit!”

“We are the only people on this trail,” Robbie said. “We need to be smart.”

I scoffed. “The bears are not up here,” I said. “It’s breakfast time. They are down near the town, rummaging through people’s trash cans.”

Robbie stared at me. “Since when did you become a bear expert?”

He had me there.

And, since I am not, technically, an expert on wildlife of any kind (my favorite cocktail napkin is the one that says “Why yes. If drinking on the porch counts, then I AM outdoorsy!), I decided to read the fine print. 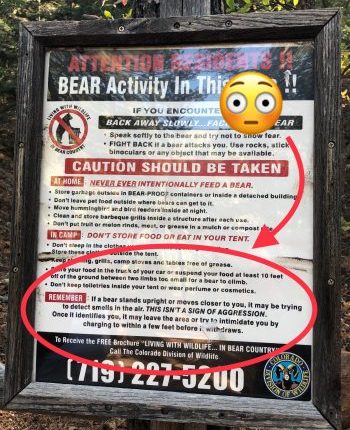 If a bear stands upright or moves closer to you, it may be trying to detect smells in the air.

Once it identifies you, it may leave the area or try to intimidate you by charging to within a few feet before it withdraws.

Alrighty then. We had options. The bear might walk away…or it could charge.

I mean, we face dangers and threats all the time. And sometimes, like a disinterested bear, our fears just sort of pack up and leave: The test comes back negative. The money is there. That thing’s not a spider, it’s lint.

Sometimes, though, we find ourselves taking a charge. And sometimes, the charge is a biggie: It turns out to be cancer. He wants a divorce. It’s 2:00 a.m., and we know that this call won’t be good.

Stuff like that hurts. And when it happens, we can’t help it; we’re scared. We don’t know how to respond. Does the “don’t show fear” advice really work?

Scripture talks a lot about fear. In fact, “Do not be afraid” is the most oft-repeated command in the Bible. It crops up 70 times in the NIV (which is way more than, say, “Love your neighbor” or “Do unto others” or even basic stuff like “Don’t steal”). And that 70 times? That doesn’t even count related phrases like “do not fear” or “fear not.”

Clearly, God doesn’t want his kids to be scared.

But instead of just telling us to keep a stiff upper lip (“Don’t be afraid!”), God almost always links his command to a promise. Consider just these few examples:

In this world you will have trouble. But take heart! I have overcome the world. (John 16:33)

Don’t be afraid of them; the Lord your God himself will fight for you. (Deuteronomy 3:22)

Be strong and courageous. Do not be afraid; do not be discouraged, for the Lord your God will be with you wherever you go. (Joshua 1:9)

And this one, which I think is my favorite:

So do not fear, for I am with you; do not be dismayed, for I am your God. I will strengthen you and help you; I will uphold you with my righteous right hand. (Isaiah 41:10)

What these promises (and plenty more) tell us is that yes, life will come at us hard. It might hurt. And sometimes we’ll be tempted to give in to fear. But instead of letting that emotion take over our hearts (and mess with our physical and emotional health, which all sorts of new research shows that it does), God wants us to know that he’s on it.

Bottom line? God is for us.

And we are never alone.

Which is something that I told myself, over and over, that day on the hike. Yes, Robbie gave in to my begging, and we went all the way to the top. (He drew the line, though, when I suggested we sing, or that maybe we could pray for our kids. I think his exact quote might have been: “Let’s get out of bear country first.”)

So can I just close with two things?

The first is gratitude to my husband, who always keeps his head on a swivel so I don’t have to.

And the second is gratitude to our Lord, who says that he will NEVER leave us, and that the Spirit he gives us is is not one of timidity; rather, it is filled with power and love.

You knew we’d be scared. Thank you for not leaving us to deal with our fears on our own. Help us to remember that perfect love–YOUR perfect love–drives out fear, and that because of your presence, we can have peace. (1 John 4:18, John 14:27) 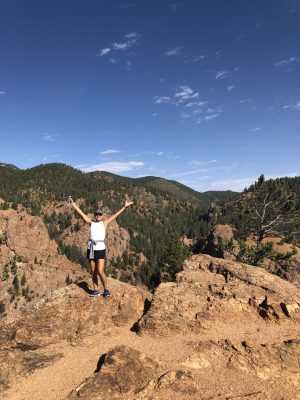