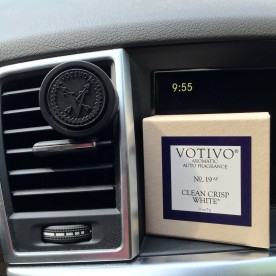 Last week my pal Dee gave me an air freshener for my car. I might have been offended except that 1) she gave one to two other gals, too, which suggested that I wasn’t necessarily a target, and 2) I actually needed it.  It’s like when someone says you have something in your teeth:  Grateful trumps insulted, every time.

Robbie and I buy used cars (“pre-owned vehicles” for those who know to say sofa instead of couch, which is apparently an important lifestyle distinction that I had never even heard of until last week). Anyhow, I love my ride, but second-hand buyers can’t pick every feature, and I got a car that came with an intermittent smell of cleats.  Yeah.  Sometimes when I crank the AC, it takes me back to those long road trips to lacrosse tournaments in places like Maryland and New Jersey, when I’d spend hours in a car with a bunch of 8th grade boys who talked about things like how to catch a rabbit with a goalie stick and hung their feet out the car windows, lest I perish.

I miss those days, but not so much that I would turn down Dee’s gift.  The box implied that it smelled like CLEAN CRISP WHITE.  I plugged it right in, and while I am not really sure what “white” is supposed to smell like, I’d wager that if you are one of those people who hangs a cardboard pine tree from your mirror and immediately gets all ho-ho-ho inside, you’d like it. (Click here if you want one.)

And I do like it, actually.  Not for the smell, mind you (the cleats might be preferable), but because it reminds me of an encounter I had with the Holy Spirit.

(But He was probably there, too.  Rolling his eyes.)

Here’s how it went down:

You may know that the Bible talks about the fragrance of God.  Perfume makers in the Old Testament crafted a special oil that was used exclusively for anointing things and making them “holy,” and the smell was both sacred and distinctive.  In the New Testament, Christ’s love is called a “fragrant offering” (Ephesians 5:2) and Paul tells us that, as believers, we spread “the fragrance of the knowledge of him” (2 Corinthians 2:14).  I had read verses like these, and I’d even heard that the Holy Spirit sometimes showed up with a “sweet smell,” but I’d never experienced it.  But I wanted to.

And then sure enough, it happened.  Within a week of my U.Va. graduation, I’d landed a job at the Christian Broadcasting Network.  I loved working alongside so many talented and media-savvy Christians – people who loved both Jesus and TV – and there were days when I felt like I could just sense God’s nearness.  One day, I was alone in the ladies’ room – the ladies’ room! – when suddenly, out of nowhere, a sweet smell began to fill the air.  I didn’t see any air fresheners (and believe me, I checked), nor did I hear any sort of pffft pffft that might signify a mechanical dispensation.  The fragrance was just sort of…there.

Now, bear in mind that I was alone in the bathroom.  (There was no one around to make fun of me except God, and I figured he’d seen worse.)

And I was fresh out of college.  (Where stranger things than finding the Holy Spirit in the ladies’ room had opened my mind to new ideas.)

Plus, I was eager to know more about the supernatural things of God.  I was primed for an encounter.

The heady fragrance grew and, while I wouldn’t have chosen that particular eau, had I been in God’s shoes, I didn’t feel it was my place to judge.  Instead, I left the bathroom and nearly bumped into an older, wiser employee who (you can’t make this stuff up) just happened to be the head of building maintenance.

“I think I just smelled the Holy Spirit!” I gushed.  “In the bathroom!  I was just standing there, after I’d washed my hands, and the fragrance just built.  Out of nowhere!”

To his credit, the man didn’t howl.  He didn’t even chuckle – at least not at first.  Instead, he gently explained that the lavatories had recently been equipped with a silent, timed-release air freshener, and that I must have been right under the air vent when it went off.

So that was that.

And here I am, 30 years later, still not knowing what God smells like.  I had actually forgotten the whole CBN bathroom experience until CLEAN CRISP WHITE brought it all back.  I did a little googling, and it turns out that there really are people who have smelled the Holy Spirit.  If you’re one of ’em, I hope you’ll post a comment on this blog, cuz I’m still curious.

But in the meantime, I’m going to drive around in my clean crisp car, focusing on things that are a little easier to understand, like the fact that each one of us really does carry the “aroma” of Christ.  The New Living Translation puts it this way:  Wherever we go [God] uses us to tell others about the Lord and to spread the Good News like a sweet perfume (2 Corinthians 2:14).

Maybe not all of us will get to smell the Holy Spirit, this side of heaven.  But how cool is it that, as we share his love, other people can detect his presence on and around us?  If we could package that fragrance in an air freshener box, I guess the best name would be LIFE.