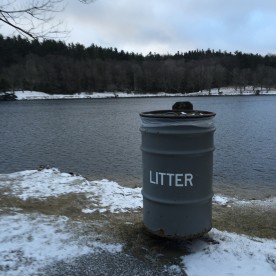 I realize that “trash” is not the most captivating subject for a blog, but two things happened last week that made me want to write about it.

The first was on I-64. I was driving behind a minivan when a napkin suddenly flew out the window. Oh gosh, I thought. Some poor mother is up there with a car full of kids and now they have started throwing stuff. Been there. Even had to turn around on the highway when the thing that blew out during a family vacay was Annesley’s blankie.

But then came another napkin, followed by a paper bag. And finally, a cup. Clearly, lunch was over, and this was a deliberate dump.

So I did what no one should probably do anymore, what with road rage and all. I floored it like I was Bo Duke and pulled alongside the perp. He turned out to be a big, hairy guy, alone in the van. He looked like he was about my age.

(Which got me thinking: Hadn’t he grown up watching the Crying Indian ad? He had to have seen that one.)

The guy saw me and started laughing. Are you CRAZY? I mouthed, giving him my best “Mom is so NOT happy” face. He laughed even harder.

And then he gave me the finger.

Robbie would say that I was the crazy one, and that I am lucky that the guy didn’t have a gun. I say the guy’s lucky that I didn’t have a gun. And that I’d grown up with a mother who never really sympathized with my problems; rather, she made me pray for all of the bullies and mean girls and kids she said were “just jealous” (isn’t that the best Mom line?) of me. One time, after a boy had hit me in the back with a basketball as we walked home from school (I ran, after that), Mom made me go back out into the road (since she knew he had to walk past our house) and curtsy, saying, “Have a nice day, Peter.”

(Yeah, you read that right. I curtsied.)

At the time, I am sure I wished my mother had checked to see if my back was okay, or at least gotten on the horn with Peter’s mother to let her know what a nasty boy she had. But Mom’s parenting style tended to run along biblical lines, and she was drawing from 1 Peter 3:9, “Do not repay evil with evil or insult with insult, but with blessing, because to this you were called so that you may inherit a blessing.”

And you know what? It made me happy. Praying for that guy – heaping blessings on his big old head – turned my indignation into joy. And even if I never see VanMan again (and I kind of hope I don’t), I just know he has some good things coming. Maybe he won’t litter so much, once he realizes how much God loves him. And who knows? Maybe he’ll even shave.

The second thing that happened wasn’t nearly that interesting. The second thing that happened was that Robbie and I were on a hike with some friends, and we saw a trash can beside a beautiful lake. I stopped to snap a pic, and I am pretty sure Robbie mocked me when he explained that I was always pulling out my phone to take pictures for this blog. “Oh good,” our pal Ralph said, “Because now she can write about trash.”

And Ralph? May God bless you today. May he shower his goodness on your family, may he keep you all safe, and may you know how very much you are loved.