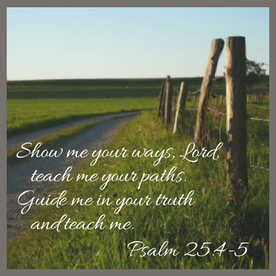 Because there’s a difference.

A lot of ways might appeal, a lot of paths might look good, a lot of what we see and hear might be convincing. But if we want to be confident that we’re on the right road or making the best decision, we need to let God direct our steps. Let’s make this psalm our Friday Prayer: