So I was poking around in the Book of Common Prayer the other day (and if you think that sounds uber-holy, maybe don’t. Truth be told, “Organize Office” was on my to-do list. But there’s a copy of the BCP* on my desk, and I got a little sidetracked).

And anyhow. I came upon this sentence: 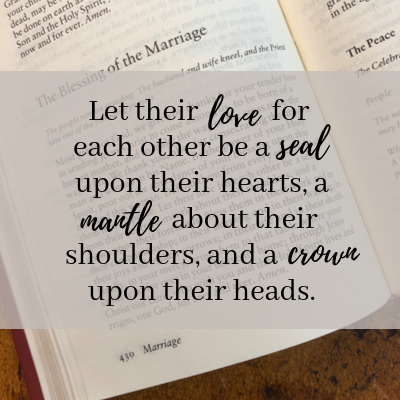 That’s just one little line in a much longer prayer, but it caught my eye. I had to read it again. And again.

“Let their love for each other be a seal upon their hearts, a mantle about their shoulders, and a crown upon their foreheads.”

Those words from the marriage service–so incredibly rich–speak to the almost inexpressible power of love.

A seal conveys security and ownership. It marks something as authentic. Could there be any better imprint than love (with its inherent patience, humility, and unwillingness to keep a record of wrongs) to guard a couple’s heart as they give themselves to each other?

A mantle, in Bible times, was a covering that represented a call to service, a purpose before God. Could there be a more potent mandate for husband and wife than to serve God and one another in love?

And the word crown points toward the promise of eternal life, as marriage reflects the covenant relationship between Christ and his bride–the one where Jesus wore a crown of thorns so that we could wear one of beauty. Could there be a more exquisite portrayal of life-giving love?

See what I mean? This is a fabulous prayer! And if you’re looking for more of the same, I’ve got good news and bad.

The good news is that The Celebration of Marriage is chock full of Scripture-based prayers; I’ve pulled a few favorites and put them on a two-sided card you can print. The front side is the blessing, and the back shows where you can find the roots of these prayers in the Bible. 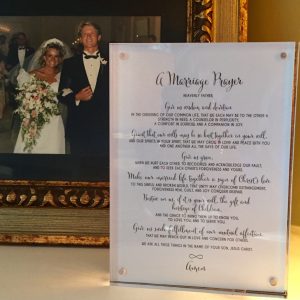 The bad news is that once you start praying this way (whether it’s for your own marriage or for another union you want God to bless), it can be hard to stop.

Which means that “office organization” might not happen anytime soon….

Give ____ such wisdom and devotion in the ordering of their common life, that each may be to the other a strength in need, a counselor in perplexity…

(Want the rest of the prayer? Click the download–or better yet, get a copy of the BCP and savor it for yourself!)

*And P.S., I didn’t grow up in a church where they used prayer books (or robes, or candles, or really anything except the Bible and Jesus), and I didn’t know what a “BCP” even was. Now I do. And if you ever find yourself in a church where you don’t know all the lingo–words like unction, or epistoler–don’t worry. Just go home and check the phrontistery.

(Which is a real thing.)

(Because you can’t make this stuff up.)

Robbie and I will be driving home at night and we’ll pass a house that’s all lit up, with cars spilling down the driveway and out into the street.

“Looks that way,” Robbie will say.

“But…they didn’t invite us,” I will say.

“Jodie,” Robbie will say, looking sideways at me. “We don’t know the people who live in that house.”

I may be an extreme (and slightly pathetic) example, but I know I am not alone in my desire to have friends. This longing to belong – this desire for connection – goes back to the beginning of time. Remember what God said when he created Adam?

It is not good for man to be alone.

Roger that. Woman either.

And it’s not just the Creation story that says we need one another; science maintains that we’re actually wired that way. Matthew Lieberman (a leading brainiac in social neuroscience) says, “Love and belonging might seem like a convenience we can do without, but our biology is built to thirst for connection because it is linked to our most basic survival needs.”

(Translation:  We need friends every bit as much as we need water and shelter. And chocolate.)

The thing is, though, not just any connection will do. Two weeks ago, I shared a post about the plusses of aging, one of which is the joy that can come with intergenerational friendships, particularly when they are the “life-giving” kind. Today, I want to explore what that sort of connection looks like. I want to look at the friendship that Mary and Elizabeth shared.

(And just a heads up:  This post is shaping up to be a little longer than normal. So maybe grab a second cup of coffee or click here to get the Bible back-story. And if you don’t have time for a long read today but you value rich friendships, just scroll to the end and jump in with the prayer.)

We know Mary – the mother of Jesus – but her connection with Elizabeth goes back to before her baby was born. Mary was a teenager when the angel appeared and turned her life upside down. Not only would Mary be pregnant, but her baby would be…the Messiah?

Sure, giving birth to the Messiah was something every good Jewish girl dreamed of, but we can imagine what went through Mary’s mind. She wasn’t married. People would talk. She wondered what Joseph would say. What he would do. Mary’s whole life – her reputation, her marriage, her future – hung in the balance. I’m guessing that having an angel to confide in was nice and all that, but what Mary really needed right then was a friend.

And God knew it.

He knows how we think. When we’ve got news we want someone to process it with, someone who will understand. And so God clues Mary in on the fact that Elizabeth is also expecting a surprise. Elizabeth is old (way old), and it makes no sense for her to be pregnant. But she is. Both women – one a virgin, and one long past her childbearing years – are in the same boat.

So Mary goes to visit Elizabeth. And, from a strictly relational standpoint, the story that unfolds is remarkable.

Think about that one for a sec. Elizabeth is older, wiser, and married to an uber-godly man who’s devoted his entire life to being a priest. How easy would it have been for Elizabeth to draw some comparisons. To think that maybe being Mom to the Messiah was an honor that she deserved. To wonder whether God had made some sort of cosmic mistake.

But no. There’s not even a hint of “Why wasn’t it me?” Instead, the first thing that comes out of Elizabeth’s mouth when she looks at Mary is affirmation: “Blessed are you among women, and blessed is the child you will bear!”

Second, Elizabeth never once hogged the spotlight. Her man had also been visited by an angel, and she was expecting her own miracle baby. Who would have blamed her, had she babbled on and on about that? (“I mean, I hit menopause, like, 50 years ago, Mary!”) But Elizabeth doesn’t talk about herself at all, other than to marvel at the fact that Mary would come to her house. “Why am I so favored,” she says, “that the mother of my Lord should come to me?”

That humility – that focus on Mary, rather than her own circumstances – is a marker of life-giving love.

And finally, pretty much everything Elizabeth said fueled Mary’s faith, rather than feeding her fear.

Mary had a long road ahead of her. Here’s how their conversation could have gone down:

Elizabeth could have planted seeds of worry:  Mary, are you sure you’re up for this? You’re so young. Have you talked to Joseph? You know how people will talk.

She could have sown kernels of comparison, making Mary feel insecure:  I don’t know, Mary. Joseph is just a carpenter.  Wouldn’t you think God would want someone like my Zechariah (have I mentioned that he is a priest?) to be a role model for his son?

She could have dug into doubt:  Ok Mary…did the angel really say you would give birth to the Son of God? Let’s go over it again. Tell me EXACTLY what Gabriel said. How was his body language?

But Elizabeth didn’t ask any of these worry- or doubt-fueling questions. Instead, she recognized God’s purpose for Mary and she validated it. Here’s what she said, word for word:  “Blessed is she who has believed that the Lord would fulfill his promises to her!” 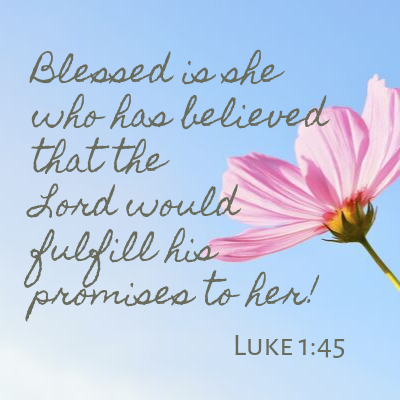 “Blessed is she who has believed that the Lord would fulfill his promises to her.” Could there be a more life-giving sentence? I can only imagine how Mary must have clung to those words, especially when she found herself having contractions while riding a donkey and having her very first baby in a stable. Without anyone around to give her a push present or start a Sign Up Genius or anything.

Because there will be times in our lives when our friend is pregnant (maybe not with the Messiah, but with a new job or a new house or a new baby/grandbaby or anything else that we wish we had), and taking delight in her happiness rails against everything in our self-centered nature.

And there will be conversations when everything in us longs to compare our friend’s pain (or their joy) to what we have been through, and we’ll be oh-so-tempted to jump into her life and say “Look at me!”

And of course there will be circumstances that look more than a little bit iffy. Uncomfortable. Scary, even. Situations where it would be easy to come alongside our friend and sow seeds of worry or doubt.

Instead, let’s ask God to shape us into life-giving people, people whose words are marked by encouragement, humility, and a desire to validate and affirm God’s purposes in each others’ lives.

Let’s speak life to our friends.

May our words bring life. May we be people who truly believe that your promises – in our lives, and in the lives of the people we love – will indeed be accomplished. (Proverbs 18:21, Luke 1:45)

P.S. Mary and Elizabeth’s connection feels especially precious on the heels of this week’s Garden Club pansy sale, where the friendships are even more vibrant than the flowers. And no (for those of you who have been around this blog for while), I did NOT steal any pansies this year… 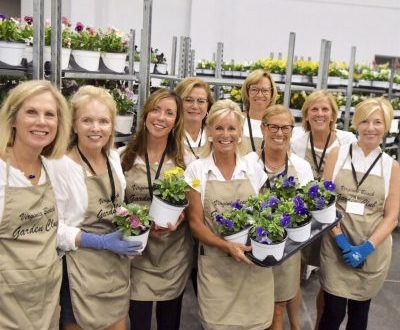