I did an Instagram Story last week where I wore this tee shirt: 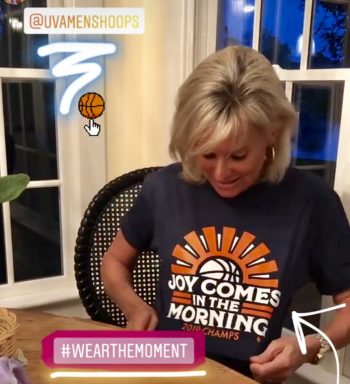 I didn’t do the story; my son’s girlfriend did. I am, as we know, painfully slow when it comes to social media, but Instagram seems to be Mary’s love language. She just held up the phone while I talked and the next thing I knew, it was posted–with hashtags, a spinning basketball, and a blinking Easter cross!

More is more, eh? I love that girl.

…but I got more than a few comments on the tee shirt.

Which made me think that it might be time to revisit the post I did exactly three years ago, the week after Easter. Which was also the week after U.Va. frittered away a big second-half lead and found themselves booted from the 2016 NCAA Basketball Tournament.

Here’s what I wrote, back then. And if you’re not a U.Va. fan and you can’t take ONE MORE WORD about Tony Bennett, please don’t unsubscribe or leave negative comments. Just scroll to the end. Because all of us–even Tarheels and Tigers–can use the promise of JOY now and then.

Joy in the Morning

Every U.Va. fan I know has been in mourning this week, except for maybe our dogs, who are high-fiving (pawing?) themselves over the fact that I won’t make them dress up to play Carolina tomorrow. 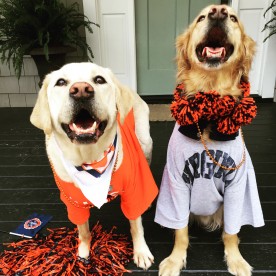 The loss was a blow, but it was Easter Sunday, and I can’t think of a more fitting day for Coach Tony Bennett to make the comment that he did. When reporters asked what he’d told the team after the game, Bennett said:

“Weeping may endure for the night, but joy comes in the morning.”

Bennett said the words came from an old church hymn. They’re also, incidentally, in the title of a book by one of my most favorite fiction authors, P.G. Wodehouse (click here for the hardcover version, here for the paperback): 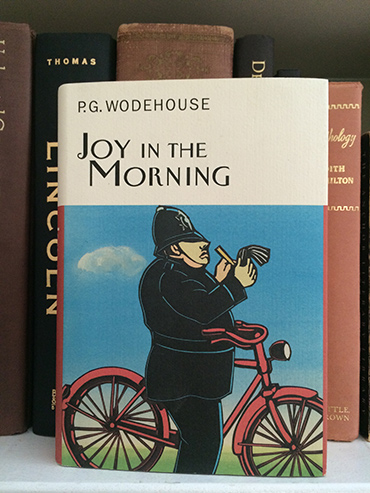 But, really, the promise of joy after sorrow is older than both the hymn and the book. It comes from Psalm 30:5.

And like so many of God’s promises, this one might be hard to believe, particularly when you are in the midst of suffering and you can’t see any way out. But, to quote Coach Bennett, “Joy is coming…I know it doesn’t feel that way, but I know it will be true.”

I know it doesn’t feel that way, but I know it will be true.

Could there be any more encouraging words? If you find yourself aching today, or if someone you love is walking through a season of sorrow and it doesn’t feel like things will ever get better, take hold of the Psalm 30 promise. Make it your prayer.

Because we don’t know what the future will bring, but we know that God is faithful. And we know that He loves us. And that his goal is to make our joy complete.

When _____ feels overwhelmed with pain or sadness, may they find hope in and strength in your promise: “Weeping may remain for a night, but rejoicing comes in the morning.” (Psalm 30:5)

First, if you want your own “Joy” tee, click here.

And second, if you’re a regular reader, you probably know that Max and Khaki (pictured above in their U.Va. gear) both got drafted into the Great Beyond. We miss them dearly, but this little gal (who arrived just last week!) is keeping us on our toes. When she’s not trying to eat them. 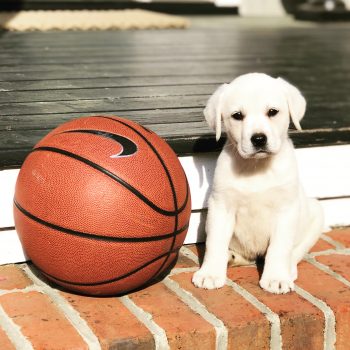 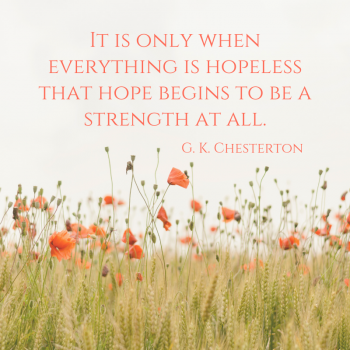 As long as matters are really hopeful, hope is mere flattery or platitude. It is only when everything is hopeless that hope begins to be a strength at all.

That’s G.K. Chesterton. And I’ve been mulling his words all week long. Because we know Easter’s coming–we have reason to hope–but what about those early believers? To Christ’s friends and his followers, things must have looked hopeless. Their savior—their closest companion—had been brutally murdered. It seemed inconceivable that He’d live again. And when I see Mary at the tomb, mistaking the Lord for a gardener, I get it. I would have, too.

“It’s only when everything is hopeless that hope begins to be a strength at all.”

If you’ve ever stood facing the bleakness—in a marriage that’s broken beyond repair, a diagnosis where the doctors have done all they can, a child who’s walked away from his faith—you know exactly what Chesterton meant. Hope needs to be more than a platitude. It has to be some sort of anchor when it looks like there’s nothing to hold.

Hope has to work.

Which is, of course, what Easter is all about.

Scripture tells us that God, in his great mercy, gives us new birth into a living hope through Christ’s resurrection. It says that hope will not disappoint. And that hope is an unbreakable spiritual lifeline, reaching past all appearances right to the very presence of God.

Isn’t that a fabulous image? Hope really is a lifeline–a strength we can count on, no matter how hopeless things look.

And as we mark Good Friday today and look forward to Easter, I’m praying for you. I don’t know where you are or what you might be facing, but I know the God of hope. And I know that He’s faithful.

May the God of hope fill you with all joy and peace as you trust in Him.

You are loved. ❤️ 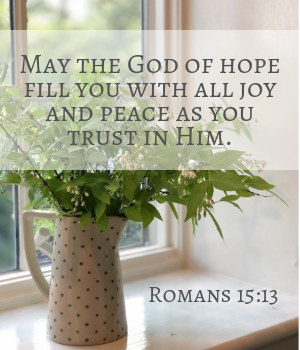 The madness is real. 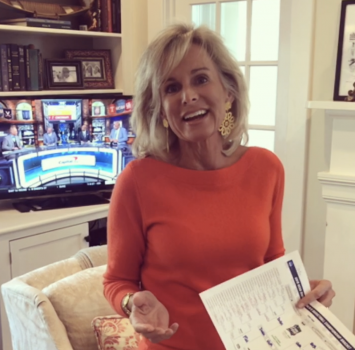 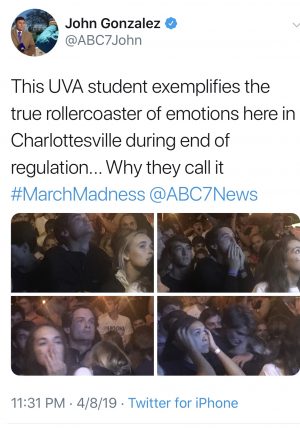 …the rollercoaster ride that is college hoops has (for U.Va. fans, anyway) never been wilder.

And all week long folks have been texting and emailing me, saying “I can’t wait to read your Friday blog! You have so much good material! Did you see where Tony said…”

Yes. I saw where Tony said. Like most Wahoo fans, I’ve done little else this week except watch press conferences, read game-recap articles, and marvel over every single shining moment (and every humility-laced post-game interview) in Virginia’s incredible turnaround tournament.

You know the story.

After an early eviction from the 2018 tourney (one where U.Va. made history by becoming the first-ever No. 1 seed to lose to a No. 16), coaches and players dug deep. As a response to what Coach Tony Bennett has repeatedly called a “painful gift,” they used the devastation as a glue of sorts, one that bonded them even closer as a team and kindled a resolve and a resilience that refused to come unstuck, even in the most pressure-packed moments.

Coach Bennett cited a line from a TED Talk (“If you learn to use it right — the adversity — it will buy you a ticket to a place you couldn’t have gone any other way”), but honestly? He might as well have been quoting Eugene Peterson. Because when Tony said that the loss had “freed him up” (making him want to be a better coach even as he realized that if he never got to a national championship game, he’d still be okay), all I could think of was Peterson’s assessment of what happened to the Israelites, back in 587 B.C.

You know Eugene Peterson from The Message Bible. But he wrote a bunch of other great stuff too, including this commentary, which I am currently loving: 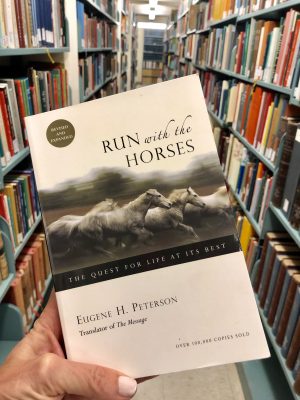 (And for all you U.Va. grads, yes. I am blogging from The Stacks at Alderman Library.)

(Which is my happy place.)

(And not just because it’s where I realized, as I was studying Shakespeare with Robbie, that he had really great hair.)

Run with the Horses is a look at the life of the prophet Jeremiah, who lived during a time when the Israelites found themselves in a place not unlike where the U.Va. players were, this time last year. The Jews had been exiled–not from a basketball tournament, but from their homeland. They’d been taken captive to Babylon.

And since I doubt you will read about this Basketball-and-Babylon connection in other sports columns, I’ll go ahead and tell you what Peterson said. “The essential meaning of exile,” he wrote, “is that we are where we don’t want to be.”

Roger that. In case you didn’t follow the story, the U.Va. players were ridiculed and reviled after last year’s loss, even facing death threats.

And exile, Peterson went on, is “traumatic and terrifying. Our sense of who we are is very much determined by the place we are in and the people we are with. When that changes, violently and abruptly, who are we? The accustomed ways we have of finding our worth and sensing our significance vanish. The first wave of emotion recedes and leaves us feeling worthless, meaningless. We don’t fit anywhere. No one expects us to do anything. No one needs us. We are extra baggage. We aren’t necessary.”

Okay, so I know some of you are scratching your heads right now, thinking, “Wait. What? I thought this was a basketball story…”

Because whether it’s a change in our tournament status, our homeland, or our life (as in, a shift in our family circumstances, our job, our health, our marriage, etc.), exile happens.

(It did with me when I hit the empty nest years. Even though I knew it was good and right and all of those things, I didn’t like it. I felt—and I still feel, sometimes—like Peterson’s extra baggage. Like I am no longer needed. Like I don’t know where I fit anymore.)

But even in those dark or unwanted places, Peterson tells us what Coach Bennett did: “This very strangeness can open up new reality to us… With the pain and in the midst of alienation a sense of freedom can occur.”

For the U.Va. players, this very strangeness—the new reality that came wrapped as a painful gift—freed them up to play harder than ever before. Not as individual athletes, but as an entire team focused on the mantra that became “United Pursuit.”

For the Israelites, the new reality meant settling down, finding out what it really meant to be God’s people in a strange land. It meant choosing to flourish–to build homes, to grow families, and to pray for the people–in the land where they never wanted to be.

And for us, exile can mean the same thing. When we find ourselves in an unexpected or unwanted place, that can (and should) be the prompt that motivates us to discover what God is up to. To seek Him with all of our hearts. To live for what really matters–focusing not on what we don’t have, but on what we do.

“Exile,” Peterson wrote, “is the worst that reveals the best.”

That was certainly true for the Israelites. Their exile led to what Peterson calls “the most creative period in the entire sweep of Hebrew history,” one in which they “lost everything they thought was important and found what was important:  They found God.”

And it’s been true for the U.Va. team. Coach Bennett is quick to point out that losing a basketball game (even if it’s a blow-out defeat like what our guys suffered in 2018) is far from “the worst” thing in life. Even so, I think he would agree with Peterson. How we respond to exile—to adversity—is what makes all the difference.

“Though it’s not the way I would have chosen,” Coach Bennett said, in the days prior to Monday’s championship game, “it’s part of our story. And if we use it right, it’ll produce something very valuable.”

And P.S. if you want something else “valuable,” you can get my “fascinator” hat off of Amazon. It’s currently out of stock in the orange color (must have been a run on ’em, what with all the well-dressed U.Va. fans), but maybe you want a pink one for Easter? Click here. 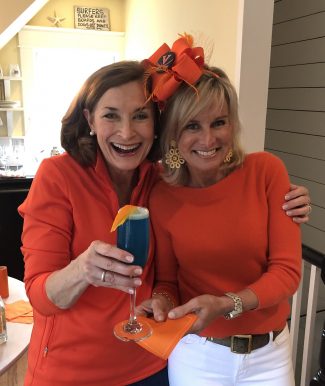